Artist and arts educator Sandy Rodriguez has been a friend of mine since 2008, which is when her artwork first came to my attention. I had previously known of her through her mother Guadalupe Pilar Rodríguez Mondragón who I had met at Plaza de la Raza Cultural Center for the Arts and Education. Sandy and I have collaborated on a multitude of projects since our first meeting — exhibitions in which our works shared the walls (“MUSE-ings: Snapshots of the Arts District” at Art Share L.A. and “MUSED: Paintings of the Arts District” in Pershing Square) and exhibitions I’ve organized for Cheech Marin at over 16 museums. I am especially excited to see her artwork on view in Houston (where I now reside), which is part of a show organized by the Moody Center for The Arts of Rice University.

Sandy Rodriguez shares how we first met at the Los Angeles County Museum of Art (LACMA) through our mutual friend Armando H. Torres; her 14-month residency in Leimert Park with Art + Practice, an organization founded by artist Mark Bradford, philanthropist Eileen Harris Norton, and neighborhood activist Allan Dicastro; how she deepened her art practice once deciding to move on from her museum career at The Getty to become a full-time artist; the expansion of her art from what was once described as “capturing moments of transformation in the social and cultural landscape of Los Angeles, focusing on themes of the persistence of place, activism, and physical and cultural regeneration;” curating an upcoming Day of the Dead commemoration for Self Help Graphics & Art; growing up along the border of California and Mexico under the guidance and influence of three generations of Mexican painters; her solo exhibition at Riverside Art Museum featuring her ongoing series “Codex Rodriguez-Mondragon;” her 2018 collaborative gallery show “Rodriguez/Valadez in Vernon” with realist painter and muralist John Valadez at East 26 Projects of Fine Art Solutions in Vernon, California; and her show at the Moody Center for The Arts of Rice University, which includes her compelling work “Mapa de Los Angeles: For Those Killed by Police in 2018.” “States of Mind: Art and American Democracy” is on view in Houston, September 18 through December 19, 2020.

Raised in San Diego, Tijuana, and Los Angeles, the latter where she is now based, Sandy Rodriguez is a painter whose current work investigates the methods and materials of painting across cultures and histories. Her Codex Rodriguez-Mondragón series is a collection of maps and paintings about the intersections of history, social memory, contemporary politics, and cultural production. After graduating with a fine arts degree from the California Institute of Arts (CalArts), Sandy established a career in arts education at the J. Paul Getty Museum. Her interest in creating organic palettes derived directly from the land led also to her studies at the Blue Wind School of Botanical Studies. Over the years, she has exhibited at a number of California-based institutions, including the Museum of Contemporary Art, San Diego; Art + Practice, Los Angeles; Riverside Art Museum; and Charlie James Gallery, Los Angeles. She and her work have been featured in Hyperallergic, LA Weekly, Los Angeles Times; on KCET.org and Spectrum News 1; and on several radio programs, including KCRW’s Press Play, CBC’s Radio-Canada Hour le Monde, KQED’s Statewide Report, and KPCC’s Off Ramp. Most recently, she was awarded the 2020-2021 Caltech-Huntington Art + Research Residency, California Institute of Technology and The Huntington Library, Art Museum, and Botanical Gardens, Los Angeles.

Sandy’s work today investigates the methods and materials of painting across cultures and histories … to me, a deepening exploration of her earlier work. Her work has stood the test of time as you view the progression of her work over the years. With the exception of a work later acquired by Cheech for the Chicanitas exhibition that I organized with him, much of her work when I first met her featured “fire” — not only relevant to what is happening right now in California and other western states where wildfires are raging, but also to the flames of the political discussions surrounding migration between the Americas and human rights. She seeks to raise awareness about immigration injustices, like the family separations occurring at the border and detention centers keeping asylum seekers. At the same time, Rodriguez’s painted vignettes make direct references to the 16th century Florentine codex; she collapses time to demonstrate the contentious nature of the land and its complex history. Through her hand-mixed artistic mediums, she pays homage to indigenous artists.

Two of Sandy’s “Pronosticos” fire paintings on canvas are on view at Torrance Art Museum now through November 28, 2020 as part of the exhibition “Rewilding Structures” organized by curator Hope Ezcurra.

The two paintings below were Sandy’s interpretations of my photographs from my exhibition “MUSE-ings: Snapshots of the Arts District,” which was on view January 18 through February 8, 2014 at Art Share L.A. The exhibition featured 52 photographs from my book with the same title (available for sale on Amazon), accompanied by paintings, sculptures and other artwork created by artists as interpretations of their favorite images of mine.

A year ago, I started thinking about doing a podcast that connected my worlds in Los Angeles and Houston. While my friends who are baseball fans might say otherwise, the two sprawling metropolitan areas are similar in so many ways — sister cities of sorts. In some ways, Houston leads the way and in other ways, Los Angeles is on top. That’s why I love these two cities so much. I get the best of both worlds. The two photographs of each city below describe how I felt at the time that I shot them: one as I was leaving L.A. (“Keep Something Alive”), which in hindsight, forecast my year in 2016; and the other shortly after I arrived in H-Town (“I Might Love You”), which mirrored how I was then beginning to feel:

Since August of 2016, until the pandemic, I have commuted monthly from Houston to Los Angeles where I had lived for over two decades. In Southern California, I am known for my work producing, promoting and navigating the art world, which includes managing the Chicano art collection of Cheech Marin, documenting the fast-changing Arts District of Downtown Los Angeles as a photographer known as @DowntownMuse, and running my consulting firm CauseConnect. In Texas, I was able to lay low for a while, enjoy art every day, and be a tourist while re-connecting with my family. My photography continues in Houston and I share images of life here online as @MUSEDla2hou (formerly @HTownMuse). Because I felt “MUSED” out and that is how I came up with the name of my podcast: “MUSED: LA 2 HOU” (if you are from New York, we pronounced HOU as YOU!).

While this is not my first podcast (I hosted and produced “A.D. Live” in 2013 and “A Muse on the Road” in 2015), this time, I had to learn and understand in-studio technology since my previous podcasts were more of an impromptu “woman on the street” format. I am learning so much, so forgive again how I am releasing this – learn with me! Between paying clients and contracted projects, I began researching what I should do, and then Covid messed up my originally planned format (hosting guests in my home, along with a live audience, salon style). Now, I also have had to learn editing and how to remotely bring guests into the mix. 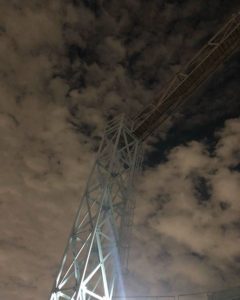